The Paralympic Games began only 50 years ago and were started by Dr Guttman in 1948. Dr Guttman worked with men who were injured during WW11 and believed very strongly in the power and benefits of sport therapy. In 1948, he held the 'London Wheelchair Games' to deliberately coincide with the 1948 London Olympics - he dreamed that his games would soon be the equivalent of the Olympics and in 1960 in Rome over 400 athletes from 23 countries gathered to compete in what was to become the very first Paralympic Games.

The opening ceremony for the London 2012 Paralympics will take place on 29th August, after which the Games will continue until Sunday 9th September. The opening ceremony for the 2012 Paralympics is set to be spectacular and inspirational. The title of the ceremony will be 'Enlightenment' and will begin at 8pm on 29th August with an incredible fly-by from charity 'Aerobility' which trains disabled people to become pilots.

The Paralympics includes 20 sports and will include 4,200 competing athletes.

Here follows the schedule for some of the most popular events of the Paralympics:

For the Paralympics, the Torch will begin another Relay after the closing ceremony of the Olympics, from 24th - 29th August, before returning to the Stadium to mark the beginning of the Paralympic Games. The Paralympic torch has been designed by London designers Edward Barber and Jay Osgerby, to display the exciting new talents of London-based artists and designers. It has been brilliantly designed, with precise laser-cut holes down the length of the handle, which allow the source of the flame to be visible without allowing heat to conduct down the length of the torch handle.

Though crowds for the Paralympics will be slightly less than at the Olympic Games, it is still very important to plan travel ahead of time - public transport into and around London will still be very busy at this time. Security at the Paralympic games will be as strict as it will be throughout the Olympic games - expect airport style security and bag-checks as standard. Bags brought into the Stadium must be soft sided and small enough to fit under seats or on a lap. Bottles of water or drink beverages of any type or volume are not permitted to be taken inside the Stadium from outside. 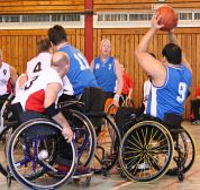