This multiple-stage-bicycle race is primarily held in France but it passes through neighbouring countries to increase its coverage and also entertain its fans. This year 2014, the United Kingdom was lucky to hold some sessions of the event for the fourth time this year. The UK had hosted the event in 1974, 1994, 2007 and this year 2014. The event took the first three stages here that produced some different winners. The race also attracted the high and mighty of the elite celebrities who came to give their blessing the riders in different stages. Some of them including the Duke and Duchess of Cambridge whom cut the ribbon for the official start of London and the third stage this tour in a very colourful event at Harewood house. The event has been very successful in our country and it has entertained a huge number of fans who came to cheer their favorite riders especially those from UK.

The event started at Leeds city on 5th July 2014 before going through several other towns for the first stage. This long tour that covered about 190.5 kilometers was a very challenging course that saw the rise of a new winner from Germany, Marcel Kittel. The course was characterized by relatively flat geographical nature. This could be the reason as to why it recorded a good finishing time on average. The course passed through important towns like the Harewood, Otley, Skipton, Kettlewell and many others before it ended at the Harrogate. This course provided the viewing of much UK historical heritage buildings and scenery. There are also plenty of roundabouts along the way, so it was not just a straight run for the riders. The towns passed through have magnificent old architectural design features that provide the stunning scenery along the paths of this tour. Riders also enjoyed many features like the Yorkshire Dales National park, the Falls, grassy meadows with plenty of flowers in bloom and also the stunning country side of the Yorkshire Dales and many other landmarks along the way. Do not forget that the area is well maintained by the local authorities who have made it lush and green with the growth of trees and hedges. This gave the whole of first stage a very good start for the Tour de France First Stage 2014.

The Second Stage of Tour de France in the UK started at York town and it covered a distance of 201 kilometers. The course was different from the first stage in several areas. First it was a bit more hilly compared to the relatively flat first stage. This posed a challenge to the riders who had to make several difficult climbs throughout the hilly terrain. The Italian Vincenzo Nibali was the stage winner in this part of the race. The course had some sharp bends and corners that made it very challenging for the first time riders that are new to this area and route. The course went through some local towns like Silsden, Keighley, Hebden, Elland and many others before ending at Sheffield. There are many beautiful areas like Holme Moss whose landscape among other scenery impressed the riders and spectators. Although the terrain was hilly, the course gave a magnificent natural terrain worth-viewing and was a pleasure to see for spectators who had visited the UK for the first time. Before the riders reached the finishing line, they must have enjoyed this part of the tour despite it being quite grueling and not forgetting the thousands of fans who cheered them along the way.

The Third and the last stage to be held in UK started at Cambridge at around 12:15 pm. on Monday 7th July 2014. This stage was very competitive since it was held on a flat terrain. The course covered a distance of 155 kilometers and it was the shortest of the three stages and saw the comeback of German Marcel Kittel who won the Third Stage. The course was well designed and it passed through the most beautiful parts of the UK like Epping Forest, and the Londons Olympics 2012 Olympic Park before it ended up at The Mall in London town. The course was a good adventure for the riders who got a taste of Epping Forest which is one of the most well known forests in the UK. The Olympic park, the Tower of London and the Houses of Parliament are some of the beautiful buildings in London that riders saw along the way, as well as Buckingham Palace being along the course, which was one of the best features to see for visitors too. This stage through London which was extensively planned beforehand witnessed a huge presence of fans that flocked the road sides to witness this rare event, as shown in our video taken from Lea Bridge Road, Walthamstow, London.

History of The Tour de France

The Tour de France is the greatest cycling competition in the world today. Covering different countries especially in Europe, the event has grown to be the most publicised race that brings together professional cyclists from all over the world. It has nurtured many talents and has provided a platform for the professionals to showcase their capability to the rest of the world. Today, thousands of cyclists register to participate in this one of a kind event with the number increasing significantly from the first event which took place in 1903. The number of fans has also been on the rise and this is a clear indication that the event has been improving over time. The race is organized on a very challenging course to ensure that only the most deserving winner gets the coveted prize. A mountainous course is seen as the best way to challenge the cyclist both technically and physically. The organizers of this event have provided an excellently entertaining event that takes in the most amazing scenery since the year it was first held in 1903. 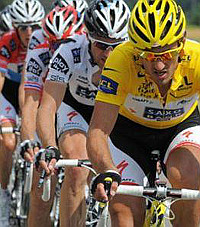